I started off the new year - Jan 2, to be precise - with a trip to a few cemeteries in SE Washington that I hadn't been to before. One of those was Sixprong Cemetery in Klickitat County. Although located in a remote area of the state, it is situated at the end of a dirt lane, just a half mile or so from a modern ranch house. In fact, no sooner had I arrived when a pickup drove up, presumably to see what I was doing. The presence of my TLR probably clued them in to me not making any mischief that day. 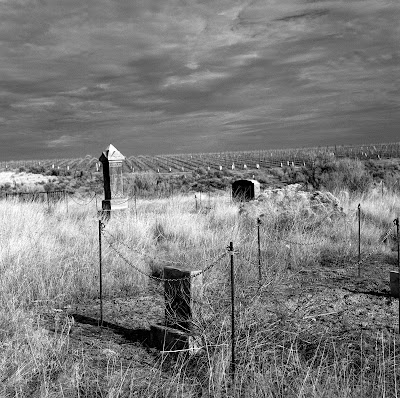 And although this was Jan 2, the temps were fairly mild with clouds and intermittent sunshine throughout the day. Perfect for what I wanted to accomplish. I brought along my Mamiya C220 TLR and loaded it with a roll of Ilford fp4+ film. I took advantage of the atmospheric conditions with the clouds and the sun and screwed a red #25 filter onto the 80mm f/2.8 lens. 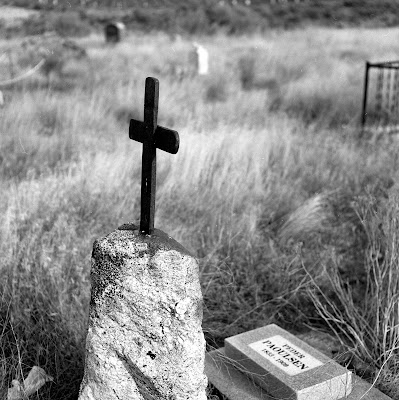 Grass has grown up within the rectangular bounds of the cemetery, with patches of thorny weeds here and there. The place is by no means abandoned and unkempt, though. In fact, I was surprised that several of the headstones - some dating back to the late 1800's, were adorned with newer monuments. They appear to have been installed in the last decade or so, many of them on either on top top of or alongside their older, existing memorial. Some artificial flowers lay quietly next to a few of the markers. With so few residents in the area, maintaining the cemetery is obviously a labor of love for somebody. 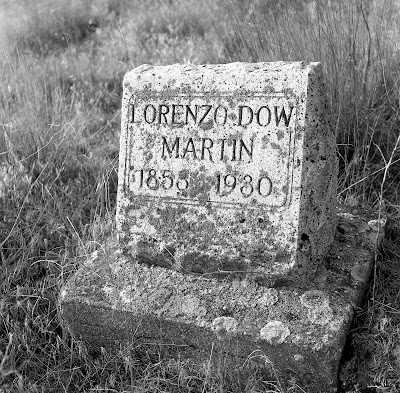 Coming home, I developed the roll in Ilfotec DD-x 1:4, at 20℃ (68℉) for 10 minutes. I've used this combination once or twice before. But not often enough, though; the negatives came out great.  Ilford fp4+ always looks a little on the thin side to my eyes, but it scans beautifully.  I had also considered using a roll of Ilford Delta 100 that I had brought along, but I'm glad I went with the fp4+. We'll break out the Delta next time. 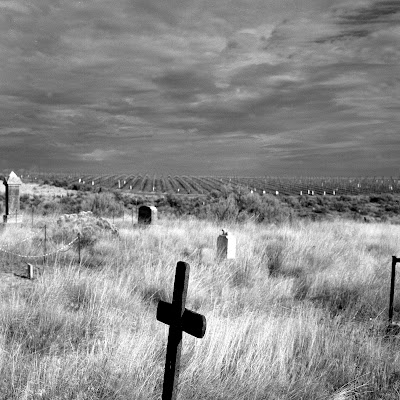 We got 2019 off to a great start with this trip. I've been bookmarking some other locations in the area, so I should be able to get more Cemetery Series posts up this year.