I love shooting color negative film, but don't always trust myself with developing it myself. Time and temps are supercritical, and my color scanning workflow can sometimes give me results I don't want. I only send my most important and most promising color film out for development.
I recently shot a roll of Kodak Ektar in my C220 medium format camera because 1) I needed to test out a new 180mm f/4.5 lens and 2) the clouds were looking really, really nice that day. This wasn't a roll that rose to the level of important/promising.  So, I broke out my bottles of c-41 developer. This was a batch that had been mixed together 6 months ago or so--the outside recommended limit--and had about 8 rolls of 35mm film through it already.
For the most part, I was pleasantly surprised with the results. A few frames I wasn't able to quite get the colors I was looking for, but had some nice images from others.
I'm shooting more color film in the Zero Image pinhole camera these days, and I won't necessarily send all of that out. When I can't, I know I should be able to get at least acceptable results by doing it myself. Usually. Hopefully. And hey, there's always the b/w conversion trick when it doesn't work out the way I wanted it to.

It was good to get out one day after school last week. We were between rain storms and some nice clouds were moving in and out of the region. I already had some business to do in another nearby town that evening, so I brought along the C220 to try out my new 180mm f/4.5.  The only problem was, I neglected to bring the step-up ring so I could put a 52mm filter on the 49mm thread. Oh well. So, rather than throw in the towel and not shoot anything, I just reverted to the 80mm f/2.8 and utilized the red #25 filter that happened to be with me. I'll get to use that 180mm in a live setting one of these days, I promise.


I haven't shot a lot of Ilford fp4+ in the past--probably never in this format--but I picked up a couple rolls on a recent trip to Blue Moon. This seemed as good of a time as ever to shoot it. 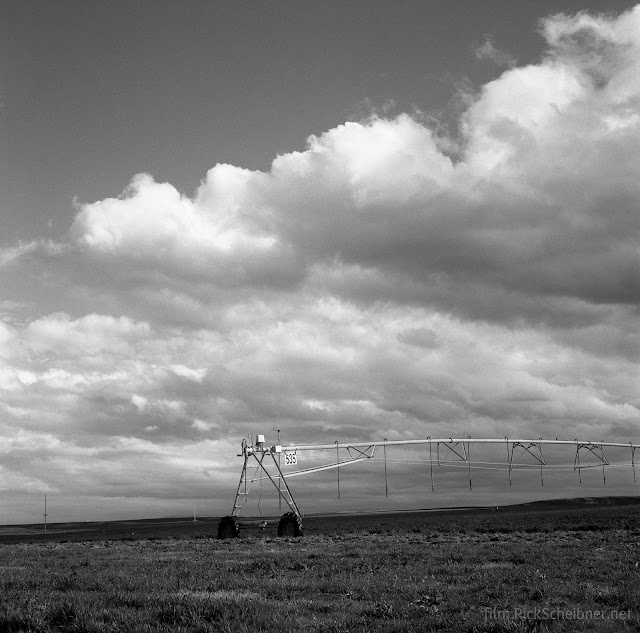 Where I live, agriculture comprises a large part of the economy and lifestyle. Farms, grain bins and other related structures dot the landscape, surrounded by wheat fields as well as some notable row crops.  At one point, our region supplied a lot of potatoes to McDonald's. There are even a few wineries in the area.


So when shooting conditions are good but I can't get very far away from home, these are as good of subjects as any to capture. 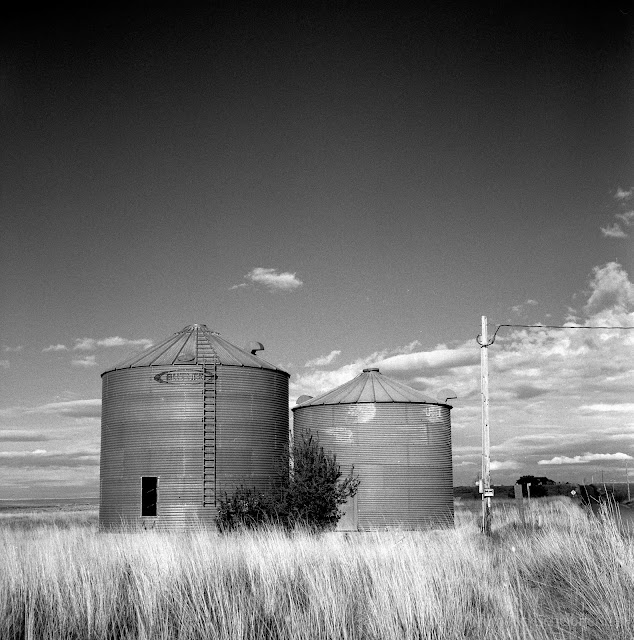 Surprisingly, there is a dearth of abandoned structures in our area. They're out there, they're just hard to find.  It seems as soon as a house, outbuilding, or grain bin is retired, it gets torn down to make room for something else. Technology in the agricultural sector here moves forward. 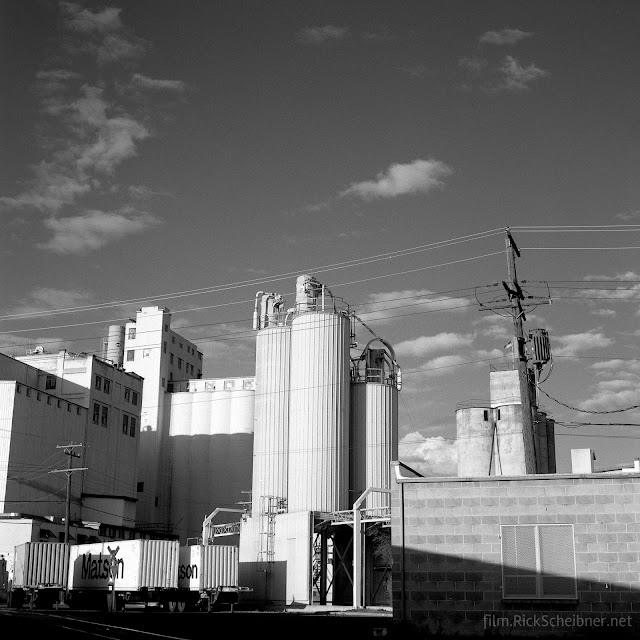 I developed these in Ilfotec DD-x for 10 minutes at 68℉. Negatives looked ok, but could have possibly used a little more agitation. Still, they scanned pretty nicely. After scanning so much 35mm film, I'm always amazed at how much more detail I get out of 120.  As stated before on this blog, this is going to be my main, go-to format this year. 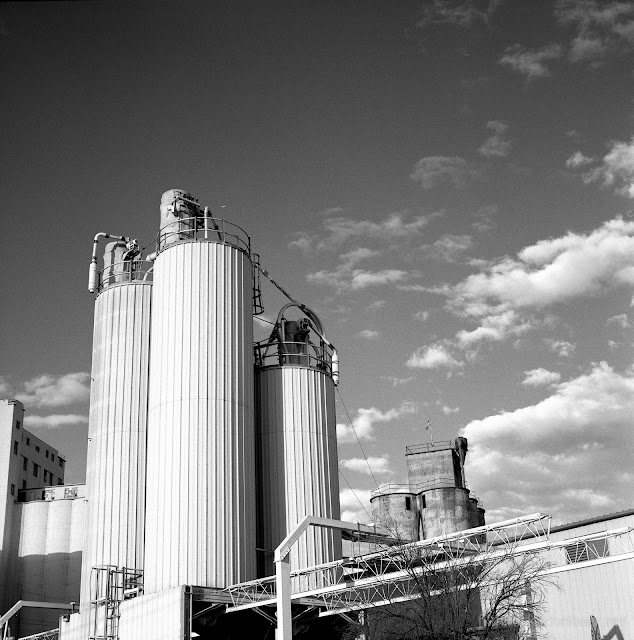 On a side note, and very unrelated to all of this, I'm retiring the Canon A-1 that I had just put some money into CLA'ing. My last two rolls have been horribly overexposed, and it's just not worth troubleshooting anymore. I love that camera, but I can't shoot it if I don't trust it. I will instead rely on my EOS cameras (I have three) for my 35mm work. They're not as small and compact, especially considering the glass I have for them, but they're accurate and I will get good, consistent negatives from them. RIP Canon A-1.
at 4/17/2018 06:00:00 AM No comments:

Edit: I had written this clear back at the beginning of March but for some reason never followed through with publishing it. I have no idea how that happened. In any event, here it is,  6 weeks later.

Fact: I have 70+ rolls of 120 format film in my freezer right now. About a third color negative (Portra, mostly) and the other two thirds various types of b/w negative.

Fact: I shot very little 120 film last year, for a variety of reasons.

Needless to say, 2017 was a lean year for my medium format photography, and I'm due to make up for that in 2018. Rather than thinking "I need more film," (like I tend to do) I just need to shoot what I've already got.   And a quick glance into my freezer shows me:
Plus, some loose rolls of Rollei 25 and Ilfords of various types: hp5+, fp4+, PanF+, etc... An exception to my call for 'no more film' here might get ignored if I decide to get some Kodak Ektar. That one film type is conspicuously absent from my freezer right now.

So even though we're already two months into it, I'm declaring 2018 my year of medium format.  I should have opportunities aplenty. In addition to some anticipated senior portrait work, I plan on making a trip to Alvord Desert in SE Oregon again, as well as some other family trips this summer. I've vowed not to let the wildflower season in the Columbia River Gorge pass me by again this spring, and that will be here before we know it. I missed out on shooting locally out in the Wallula area last year.

All that to say, with March 1 here and my own shooting season just around the corner, I'm more than excited to be back in the medium format game. And as mentioned in my last Directions post, I will print my best work, optically.