Note: See the first post in the Cemetery Series for more details about this project. Entire series here.

It has saddened me to visit a rural cemetery in the past and see blatant vandalism committed to the grave sites. Sadder yet is when efforts are no longer made to fix the damage done, to put things back together. The people who cared about them and marked their existence are now gone themselves. 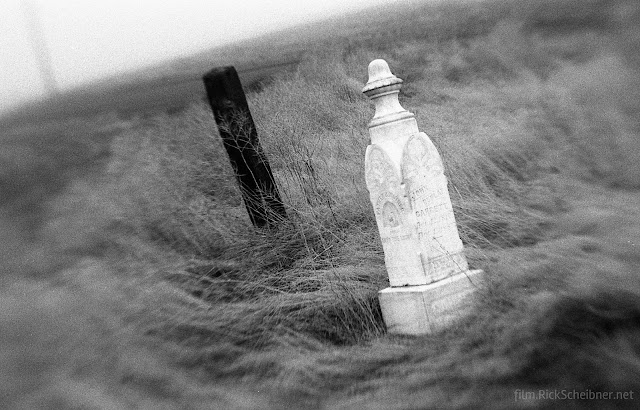 I think this is more common in our rural pioneer cemeteries, away from anything resembling a city and away from the manicured green lawns and big, sprawling oak trees. We know that these people lived a hard life. In our efforts to create an idyllic past, however, we gloss right over the poverty and despair and hardship many of them lived through during that time. And life itself was never a guarantee. So many of these markers record dates of children who never made it past grade school. Some of them lie side by side by side, all from the same family. 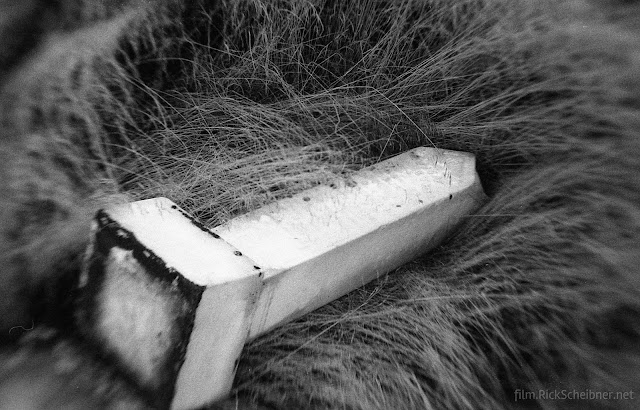 Time has taken its toll at Sand Hollow Cemetery. Find A Grave reports that as many as 95 graves exist here. I personally question that number; it's just hard for me to fathom that many people in such a small area. But it's clearly more than big enough for the 19 that are known, and seven whose markers still exist today.  I think the vandalism left standing has kind of given way to a natural deterioration all its own. Some day, even the place itself will be forgotten. 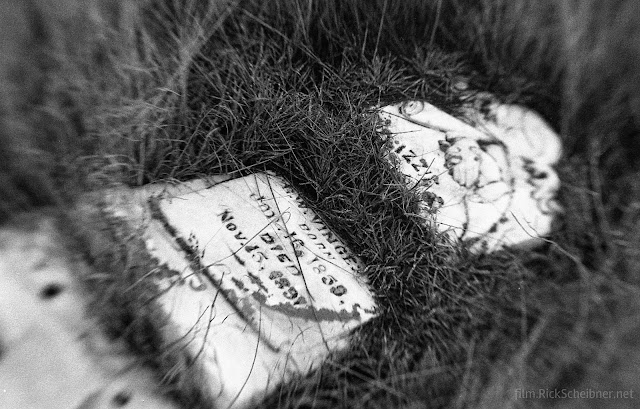 The day I visited in January was cold and gloomy, just a hint of precipitation in the air with the fog just starting to roll in. I didn't stay long. Perhaps I would have if the day had been filled with better skies. As it was, there wasn't much to shoot, certainly nothing sticking up out of the ground. In fact, as I approached from the road, only one marker was visible. Everything else had been toppled over and lie hidden in the grass.

I shot these with my newly-repaired Canon Elan 7, a camera that I had given up as beyond repair when a technician told me he had a part for it. This has been my flagship film camera in the past, so it was a great relief to get it working again. Sometimes it's nice to shoot and not have to think about what I'm doing. And yes, I used a Lensbaby on this, a Muse actually, probably my only impulse purchase related to my camera gear. These were all shot at f/8, in case you're wondering.  I don't get this lens out often, but when I do I try to make sure its unique characteristics are used to benefit the photo, and not just as another toy. It's probably up for debate whether or not I accomplished that here.