Note: This is an on-going series of articles documenting the old and abandoned cemeteries of the inland Pacific Northwest on film. You can see the entire series here.

When my dad got sick two years ago, I started making more trips back and forth to see him and help out with his care. This was an hour away from where I live and I could easily get there by traveling most of it on an Interstate Freeway. Instead, I decided to use the backroads, something I hadn't done for several years.


Those back roads take me right through an area called Holdman, which includes a small cemetery built on a hillside, just above the main road but hidden by a bank of greasewood brush. Unless you know to look for it, you can drive right by without ever knowing it's there. I have stopped here with my camera maybe a couple of dozen times, so I'm certainly no stranger to this cemetery. I was going right by it on my way to visit Mom when I saw that the clouds were breaking up and the sun was starting to poke through. I hadn't planned on shooting anything, but this was as good an opportunity as any that I was going to get this day.


Luckily, I had a camera with me, albeit not everything at my disposal. This was my Canon Rebel 2000 loaded with some Ilford PanF+ 50. I decided to shoot it at ISO 40, something I've had some luck with before. Unfortunately, my only lens was the kit zoom that came with it: A Canon EF 80-210 f/4.5-5.6.  Not my first choice, but I did have a red #25 filter that fit.  What's the best camera you can shoot? The one you have with you.  So, that's the setup I used.


That kit lens clearly doesn't hold a candle to any of the L glass I have available for an EOS film camera. It would have been nice also to have my 17-40mm available for some wider shots. In that case, I would have been able to get closer to the monuments and make them more prominent in the image, without having to decrease the importance of the sky. But maybe next time. 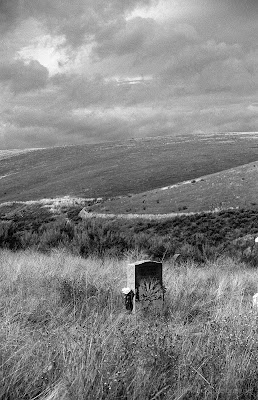 Having exposed these images a third of a stop over box speed, I developed these in Rodinal 1+25 at 68℉ (20℃) for 5 minutes. The negatives came out a bit thin, and the resulting scans contained more grain than I'm used to seeing in PanF+.  I'm not sure if that is due to compensating for some under development or the fact that a red #25 filter always seems to pronounce the grain more in my film images. The resulting contrast was a little more than I'd bargained for, but as I look through these images I think it helps enhance that sense of stark isolation.