I previously described my efforts to troubleshoot some vertical lines showing up on the negatives taken from my C330. Suspecting problems with the reel, I shot a second roll of Tri-x, all frames of the same scene. When I loaded the film for developing this time, I reversed the direction of the roll so that it loaded frame #1 first.  You can see the results here:

This time, there was no difference in the frames; the vertical lines showed up equally in both.  Back to the drawing board, although I still suspect reel issues. The next time I load onto the reel, I'm actually going to do so upside down and see if that makes a difference. If it does, I will have solved my problem. If not, then it really is back to the drawing board.

Which brings me to my last point: Even though I've narrowed it down to a developing issue, there's still the nagging feeling that's not it. I don't get this problem with my Zero Image pinhole, although it's been several weeks since I've used that camera. In Part 3 I'll show the results from upside-down reel loading and discuss some next steps from there.
at 6/26/2017 09:45:00 AM 2 comments:

A couple of years ago, a problem began showing up on the negatives from my C330. A vertical line (and sometimes two) would appear at the edge of the frame, inside the exposed area.  You can clearly see the issue in this image (look immediately to the left of the words "Ilford 100 Delta"): 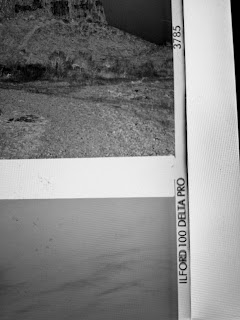 I sent a test roll out for developing to see if the problem originated from the camera or the actual developing process.  Those negatives came back just fine, so the problem must be in my processing. Still, though, this problem never crept up when using my Zero Image pinhole, so that really had me confused.

I kept trying to work out the problem, but couldn't locate the source, so my C330 sat on the shelf for awhile, only being used occasionally until now.  Thing is, this is a really nice camera that takes otherwise exceptionally sharp images, so recently I began trying to troubleshoot again.

Zeb took a look and showed his folks at Blue Moon Camera and Machine. They reinforced the idea that this is indeed a processing issue, and that they had seen the problem themselves occasionally with Paterson reels. Other suggestions from the internet involved inversion method and the amount of tightness on the reels.  Armed with all of that knowledge, I ran a roll of Tri-x through it again, but this time made an important discovery: The lines showed up in the first few frames of the roll, but not the last. They were somewhat visible in the middle.  If what I'm seeing is correct, that means that, for this roll anyway, the end loaded first didn't have the problem, and the end loaded last displayed those lines.


Now, I can further narrow down what is actually happening.  Two scenarios come to mind.  In one, there is something rubbing the emulsion off toward the outer edge of the reel. While this makes sense, I've tried using different reels (four, in all) without seeing much of a change.  The second scenario, which seems more likely, is that fixer isn't getting all the way to the outer edge of the reel and is being blocked up. The second one is a simple test: Go grab those frames, re-fix for a few minutes, and see how they come out.  I'll try both of these out and report back in Part 2 of this series.
at 6/09/2017 06:14:00 AM No comments: