If the first iteration of my Baker's Dozen series kept me at home, the second has me venturing out a little further on a familiar road. I spent a Friday afternoon after school along the Columbia River, crossing the Oregon/Washington border and traveling on through the Wallula Gap and its neighboring overlook.

This route is a great standby for me. A familiar friend that I join when I can't take a longer trip. Or don't have that option or the time. It hasn't gotten boring to me yet, even after dozens of trips over the last 12 years or so. And every time I go through there with a camera, I see something new. Or something old in a new way.

This particular mid-May afternoon had some beautiful, puffy clouds against a blue sky, with just a hint of a wind coming from the west. I chose fp4+ for this trip because of its familiarity and predictability with a red #25 filter. This is a contrast to my first post in this series, which involved a film that I was shooting for the very first time. Bringing along a film stock that I've shot dozens of times before in that scenario gives me the confidence to fully consider my compositions and what I want to accomplish with a photograph.

Film photography being, well, film photography, we're subject to the mechanical limitations and inevitable failures of our equipment. As successful as this roll was on this trip, I did come back home with a casualty. About halfway through the roll, I discovered that the aperture blades weren't moving smoothly through each setting. I set the timer to bulb and gently tested each one. Sure enough, the blades weren't meshing from f/8 to all the way open at f/2.8.  I still had a few frames to shoot to finish the roll, so I left the aperture at f/22 and hoped it would do its job until I got home. We came in on a wing and a prayer, as I've heard a few WWII vets say in my younger years.

So, I'm sending the 80mm f/2.8 off to be serviced.  I'm told they'll have it 4-6 weeks, which doesn't sound unreasonable during this age of Covid. In the meantime, I do have a 180mm f/4.5 that I don't use nearly often enough. I keep wondering if I should do this same trip using that lens, and then see the difference.

Because, after all, the same route next time could bring completely different results. Here are a few more images from this roll: 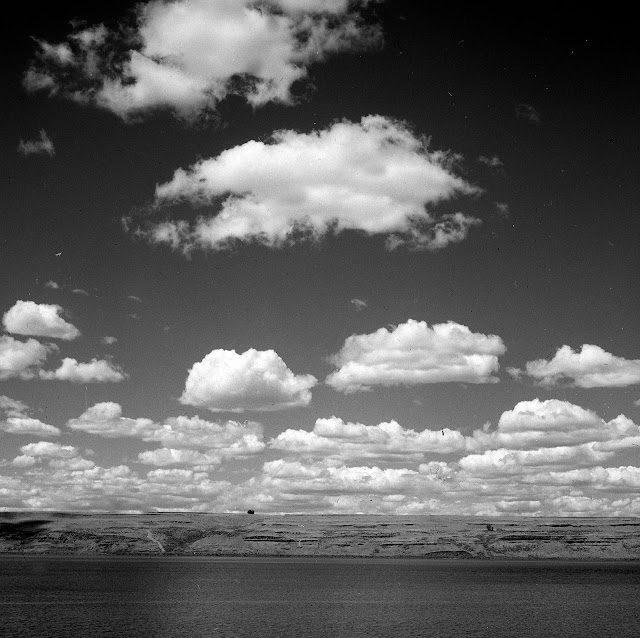 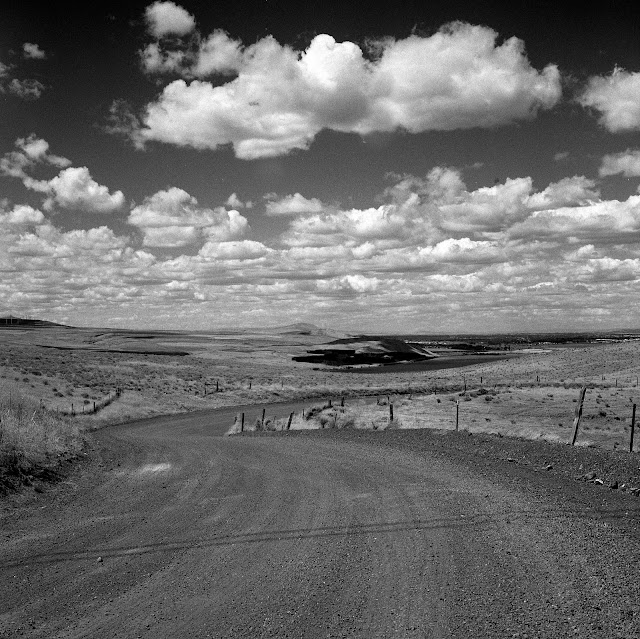 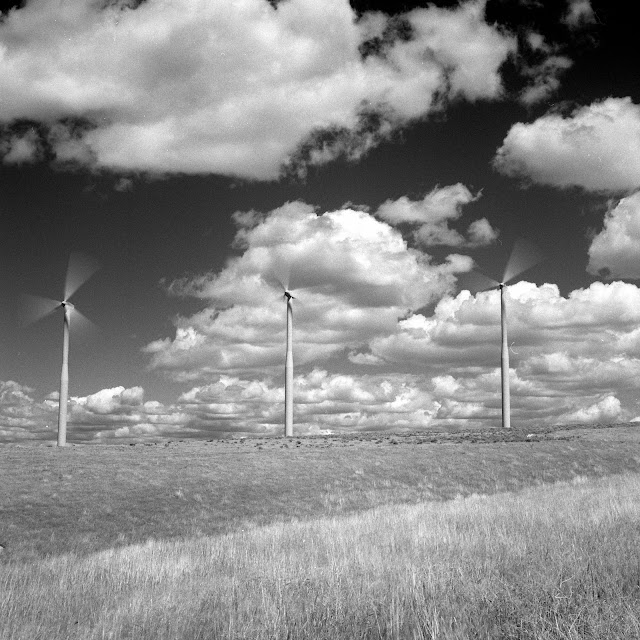 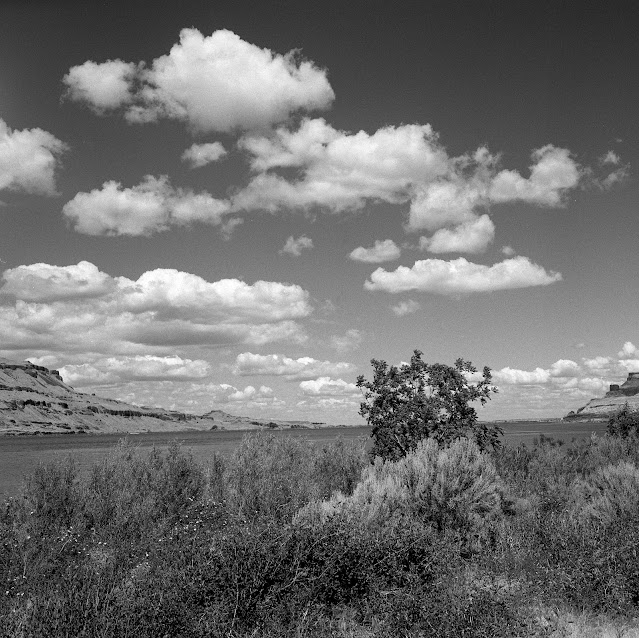 Edit: As I look a little more critically at a few of these photos, I'm seeing a little light leak creep in at that top left hand corner. It's slight, and barely perceptible in most cases, but it's come up before. I need to be mindful of sunlight hitting that corner of the camera. When I shoot some higher speed film at 1600, I wonder how much of a problem it will be given the increased sensitivity to light? Looks like I need to do a test to find out.
at May 19, 2020 No comments:

I did two things six months ago that I'm just now getting around to: I bought some Ilford Ortho Plus film and announced my Baker's Dozen project for 2020. In both cases I had the intention of addressing much earlier in the year. In February/March I had an illness and surgery to deal with, and then we had this whole Covid-19 thing that has dampened a lot of travel plans. It's May now, so travel plans or no, I need to do some shooting.
To be sure, I bought this film knowing it was going to have a different tone palette. I wasn't just going to slap on a red #25 filter and get some big, contrasty clouds against jet black skies. In fact, I wasn't going to be able to use a red filter at all. As I have seen others posting online over the last few months, it certainly has some best-use cases.
Not wanting to do traditional landscape shooting with it, I looked around for an alternate subject that might take advantage of its characteristics. Instead of mountains and sky, I wanted to look for some wood, metal and vegetation. Our recent landscaping project included all of that with our wood fence, metal windmill and spring plants. The basalt rock slab with a continuous flow of water flowing over it was just icing on the cake. As I am working much from home these days, it's been a pleasant place to park next to with my Chromebook and coffee on these really nice mornings.
Now, about the film. It's nice enough, and I can certainly see myself using it on architecture or other human-made artifacts. At ISO 80, though, it's probably too slow to be an effective street film, especially when hand holding. On the other hand, I do like the water motion I was able to get with the slower speeds. I've seen a few photos of waterfalls (sans sky) taken with this film and it's quite a compelling look. These particular photos were all taken with a somewhat filtered, hazy sunlight. Probably f/11 or so. It should be able to handle direct, f/16 sunlight just fine. I have a few rolls of it left, and one in 35mm format, so it will be good to try it in different light settings. After it's gone, though, it will really have to be a special occasion for me to pick it up again. Unless, of course, I can find a subject I like to shoot that really works well with it.
at May 12, 2020 No comments:

Document Your Life/Roll in a Day

I decided to combine a roll-in-a-day project with a #documentyourlife theme. Like many others, I work mainly from home these days, and am lucky enough to have a back porch and some nice, sunny spring days to spend it with. I shot these with Ilford Delta 400 at ISO 1600 and pushed two stops in Ilfotec DD-x. I haven't shot this film nearly enough, but I was reminded how well it pushes that far with unobtrusive grain. It might very well be my next bulk loaded b/w film. 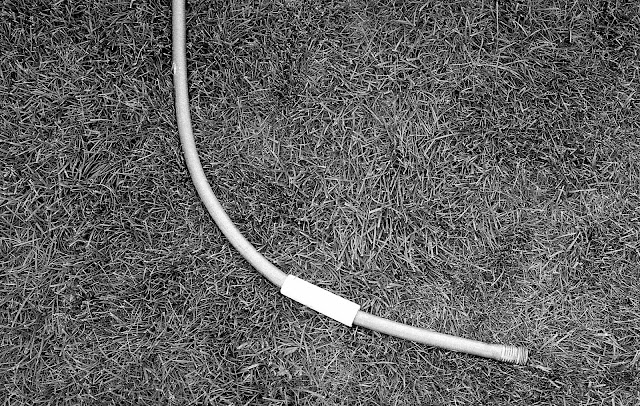 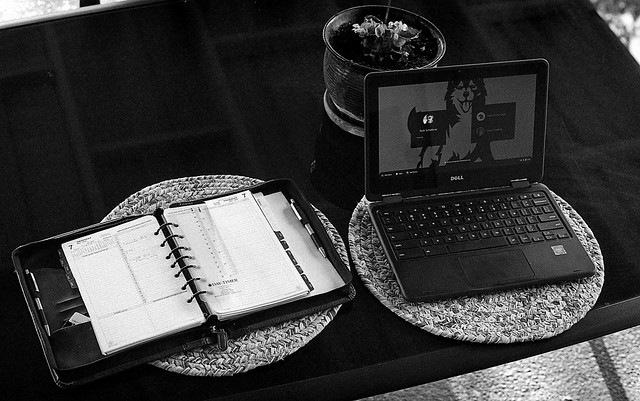 I started a roll of Ilford HP5+ at ISO 1600 last November. I meant to get it finished up some time over the winter, but things happened and it was last Sunday before I got it done. It's amazing how much the world has changed in those five months.

The Coronavirus and some non-life threatening medical issues over the past few months have prevented me from shooting or processing much film. So, I managed to finish up a roll of JCH Streetpan and get it developed the other night. Turns out I had shot right on top of a roll that was exposed a year or so ago. I'm not sure how that roll got mixed in with my fresh film stash, but here we are. It's a good thing I've got several rolls left of this film, because otherwise I would be REALLY disappointed. As it is, I lost some good frames.

On the  other hand, a few of the images are pretty cool. Here are a few that stand out to me. 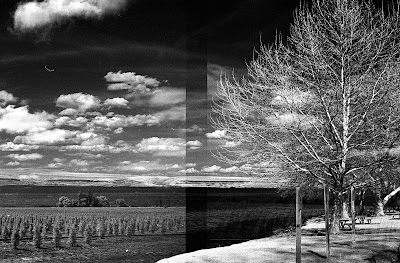 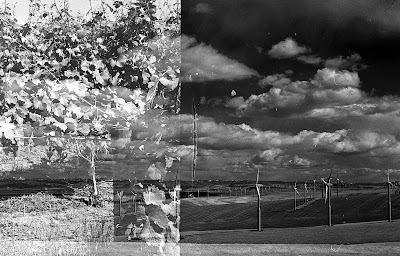 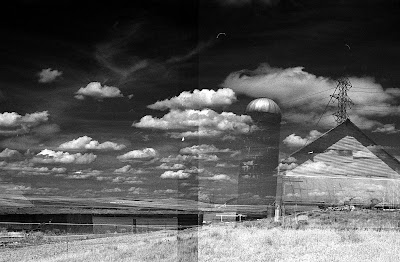 You can see the entire, 36-frame roll on my Flickr album here: 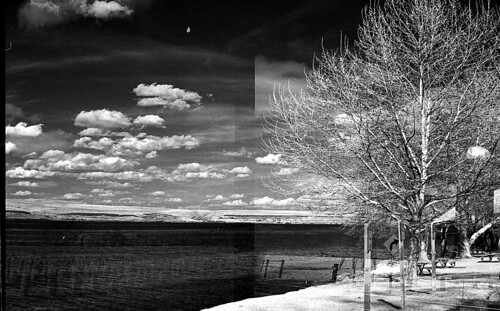 It's always difficult to know what to put into my annual Directions post to keep it fresh and up-to-date. I just don't want to rehash what's been brought up before. To be sure, I will continue some practices that I've previously established. Optical prints of my color work is one that comes to mind. But I do have a project in mind as well. Here are some of my current thoughts that will guide my film work in 2020.
Well, that wraps up my thoughts about the upcoming year.  Things can always change, of course, but I don't see myself moving very far off of these in 2020.
at January 03, 2020 No comments:

Does it seem like 2019 just flew by? It sure did to me. I had to go back and look at my Flickr photos to remember what I did on film this last year. Quite a bit, as it turns out. I was especially surprised to see the variety of formats and emulsions that I took on during the last 12 months. Here's a sampling, and in no particular order:

1. I shot some Ektachrome and had it processed at Blue Moon Camera and Machine in Portland. They even put them in the little slide holders. I have enough of these now where I could probably put together a little slide presentation at some point.


2.  I shot some Kodak Ektar on my Zero Image and got some prints done, again by Blue Moon.


6. I figured out Ilfotec DD-x doesn't play nice with Ilford HP5+ at box speed. Not the way I shoot and develop, anyway. In coming to this conclusion, I first had to eliminate the possibility of a faulty camera.


7.  I took a group of middle school kids on a trip to the Columbia River Gorge and I brought along the Zero Image.

8. And finally, I caught some sailboats in the Wallula Gap on my Mamiya C220. It was a great use of the 180mm that I neglect too often.

All in all 2019 was a fantastic year for film for me. Next up is my annual 'Directions' series where I discuss how I will be using film in the upcoming year.
at December 30, 2019 No comments: